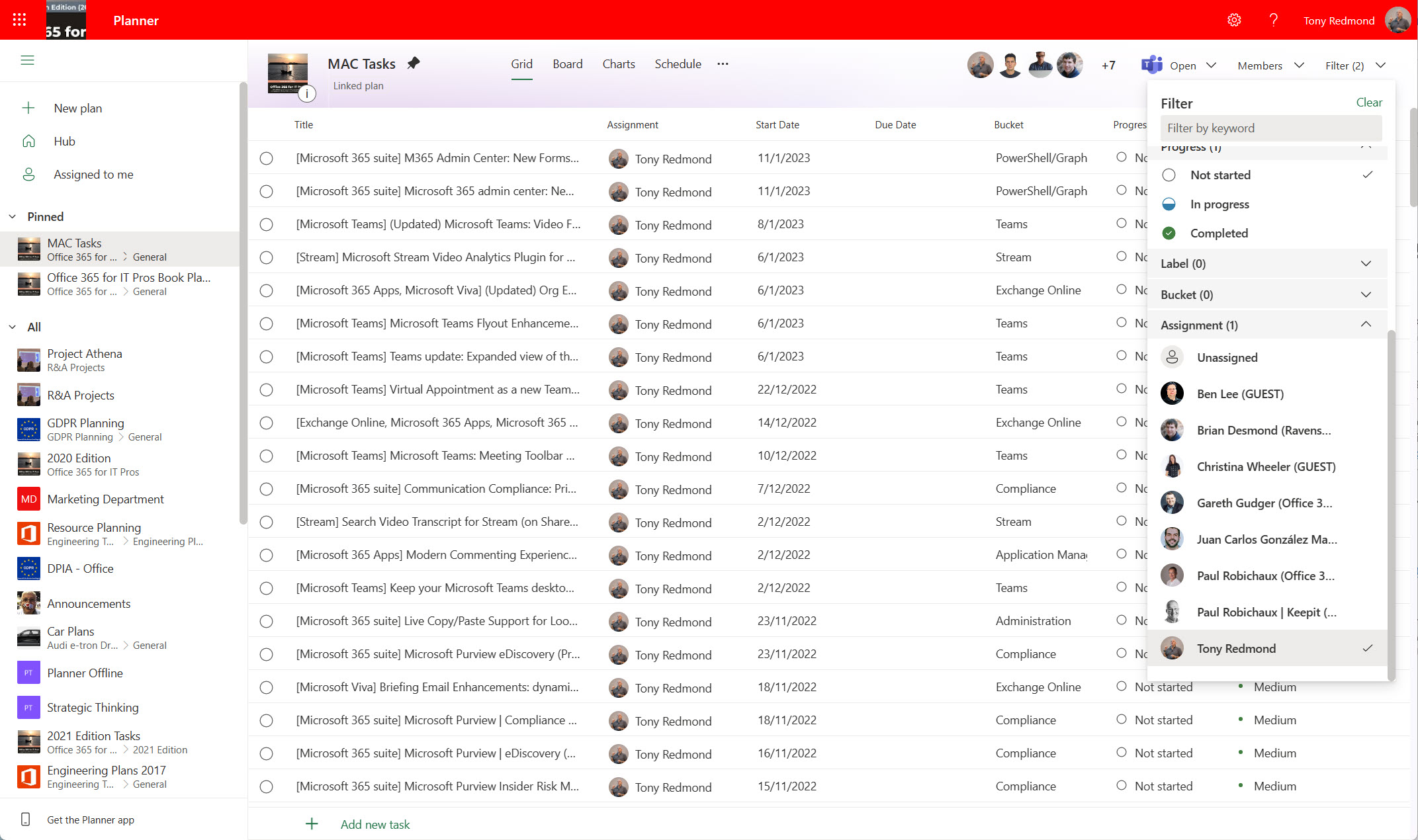 Planner grid view and recurring tasks are now available to Microsoft 365 tenants. Grid view is a much-requested feature while recurring tasks are also welcome, even if Microsoft forgot to tell people that the new capability was coming. Grid view is probably the biggest update Planner has received since 2020, but maybe an even bigger change is on the way with application permissions for the Planner Graph APIs. Time will tell. 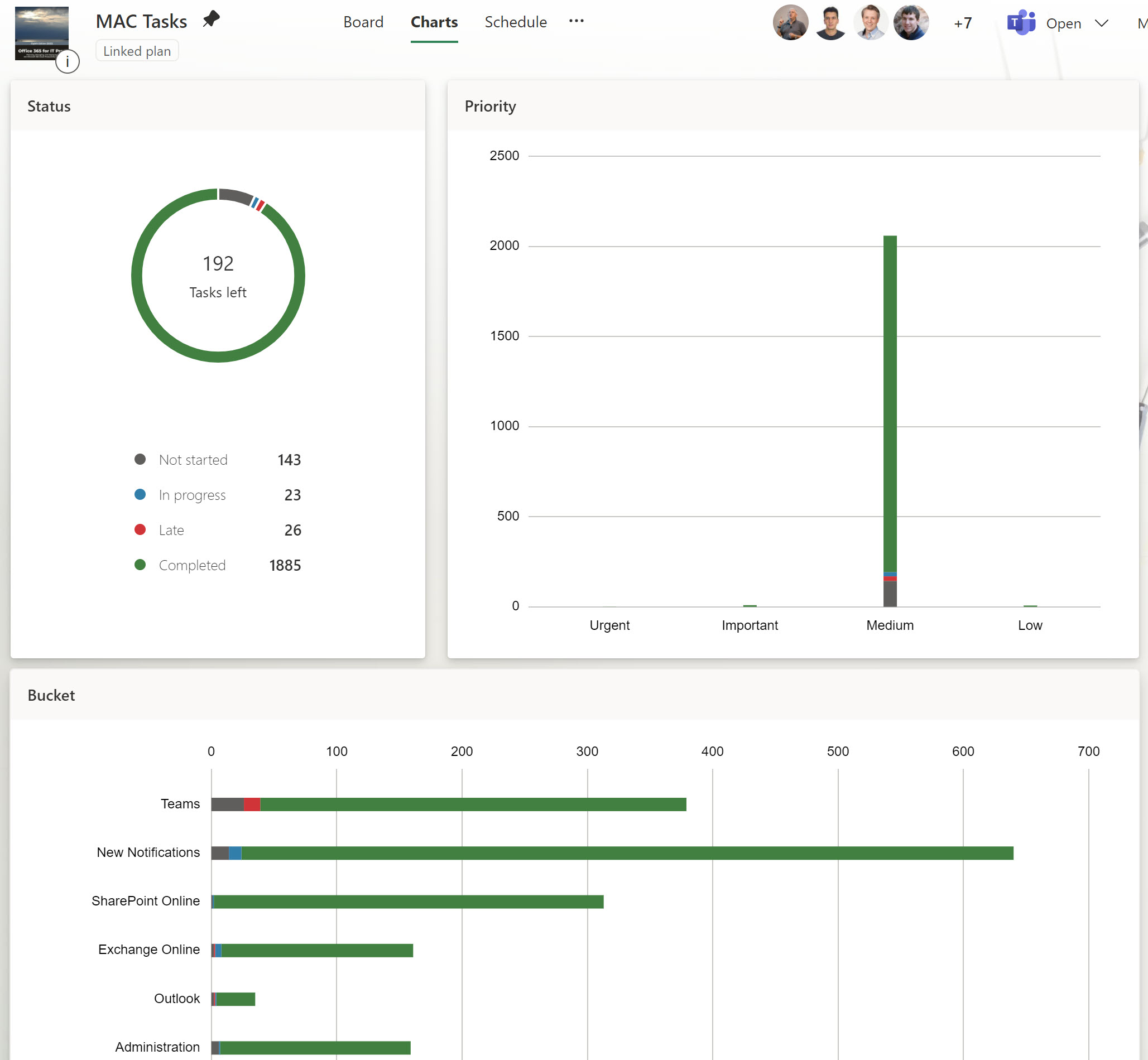 Microsoft’s documentation for Planner limits raises more questions than it answers. Some of the documented limits are straightforward and easily understood. Others are just plain odd and bear no resemblance to what people see when they use the app. Microsoft’s writers have some work to do…

Administrators can set a block policy on users to stop them deleting Planner tasks that they didn’t create. The feature isn’t well known, but might be useful in situations where plan owners want tight control over task deletion. Unfortunately, the implementation isn’t well finished and client user experiences are not what you’d like. 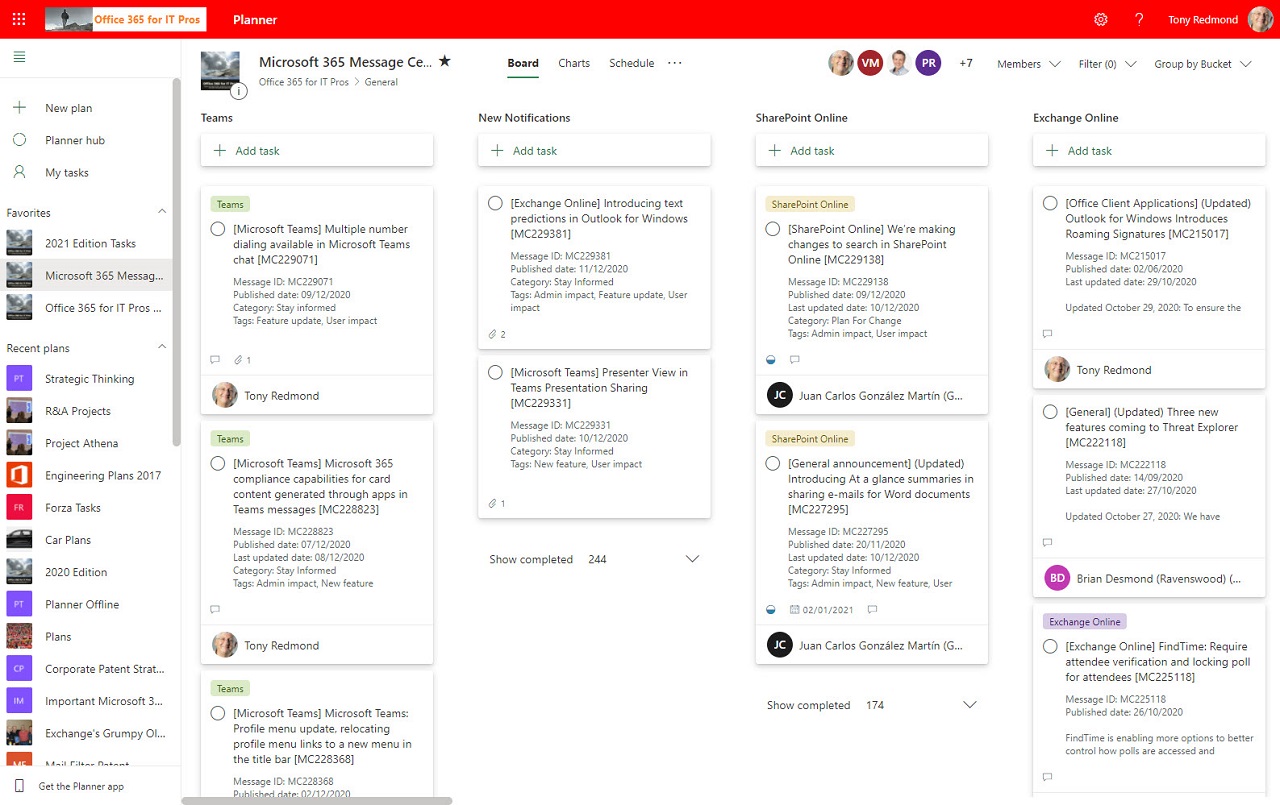 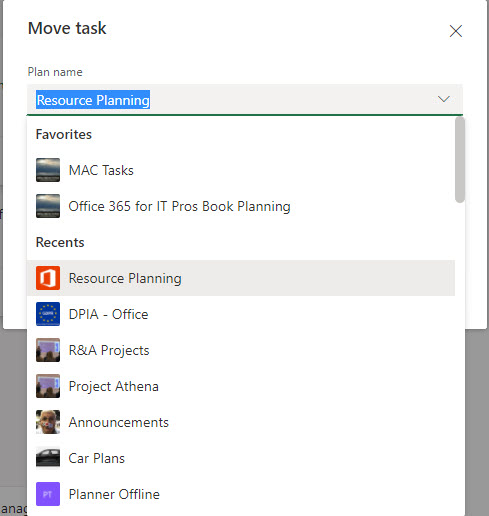 Microsoft will soon introduce roster containers to Planner. These are plans without Microsoft 365 Groups that apparently are tied to some mysterious new functionality. Because we have no idea what this functionality will be, we decided to disable it using Planner’s odd approach to PowerShell. Suffice to say that it’s not straightforward. Now if only someone had a plan… 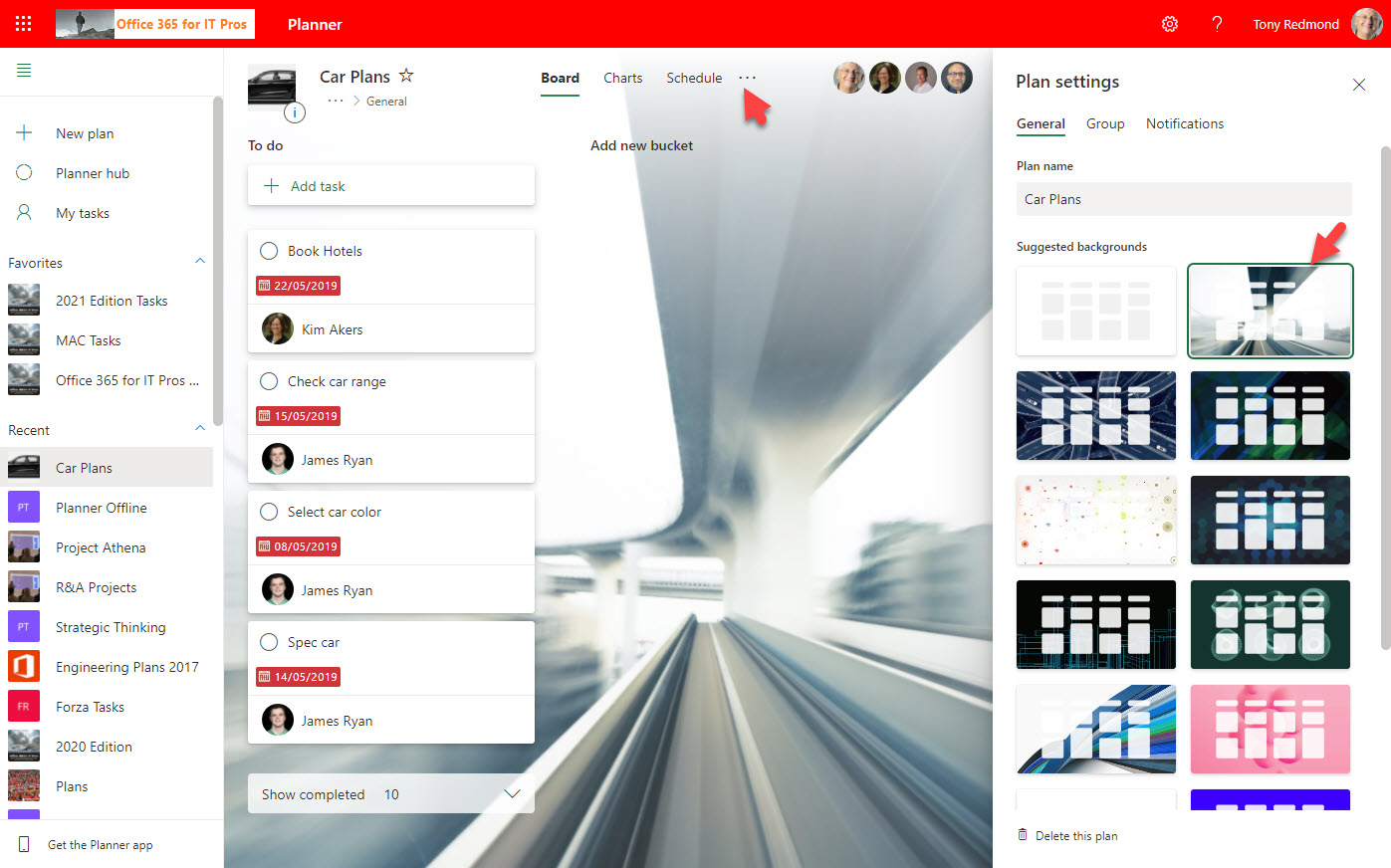 The ability to assign “smart backgrounds” generated by Designer to a Planner plan is now rolling out to Office 365 tenants. The smart part of the background is that the plan name is used to generate the image. Any plan member can change the background, which should lead to some entertaining conflicts when people differ over the choice of background. 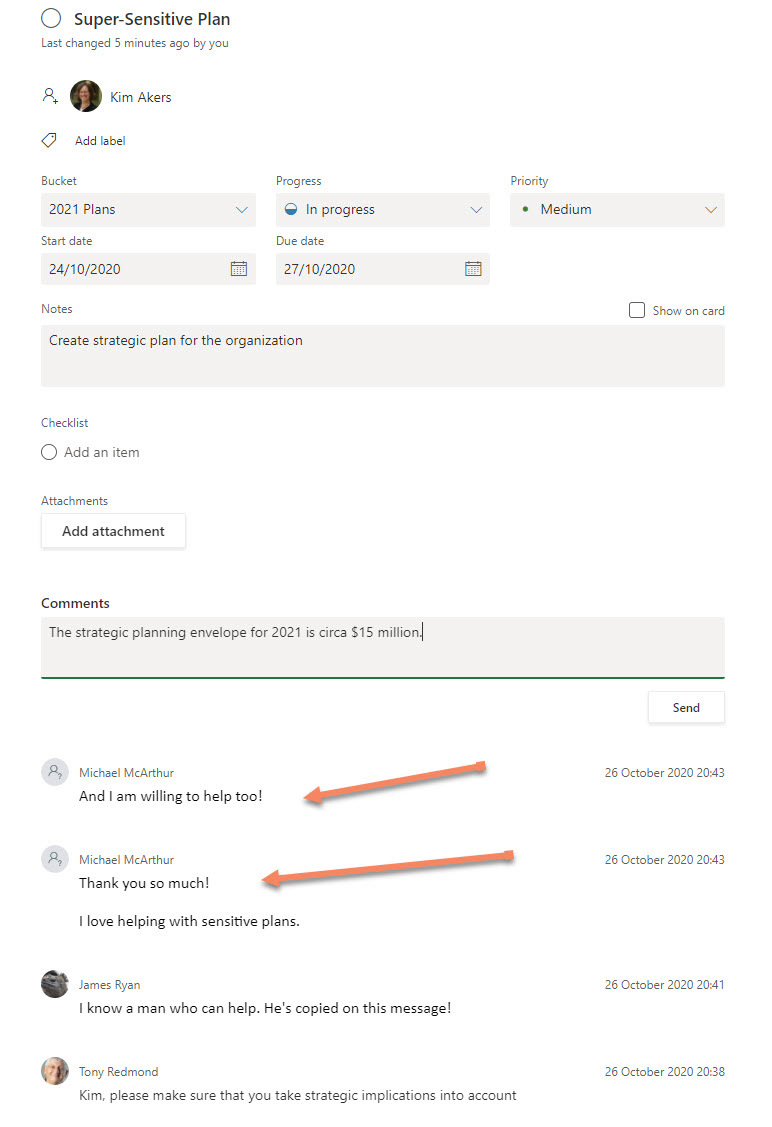 An unfortunate problem in the Office 365 Planner app allows external recipients to be added to to email so that they receive and see comments posted for tasks. Although this doesn’t sound like such a big problem, it is because it can lead to confidential information leaking outside the organization in an uncontrollable manner. Microsoft support says that Planner is working by design. We don’t believe that this could possibly be the case. 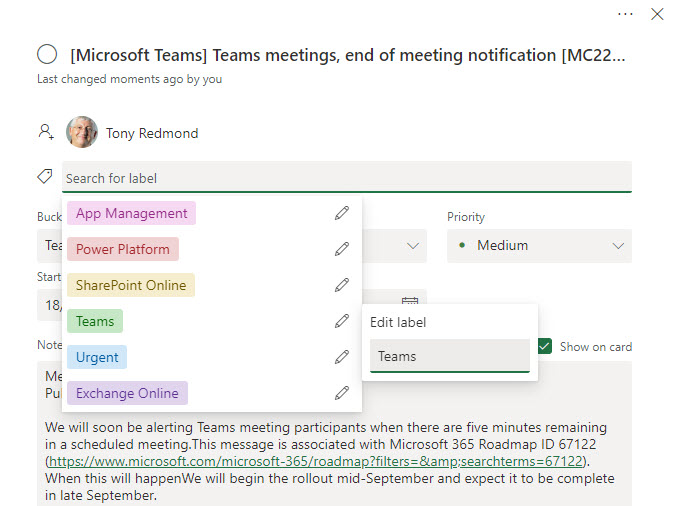 Microsoft has updated task labels in the Office 365 Planner app to make the labels more accessible and obvious (and therefore more useful). Changes due to arrive soon include an increase in the number of labels from six to 25, more intelligent attachments, and an upgrade to the Teams integration to allow tasks be created from chats and conversations.

Microsoft Planner is able to work in offline mode when disconnected from the network. In this article, we describe what the browser client can and cannot do when it’s not connected. The thing is that Microsoft hasn’t told anyone that Planner can work offline. No blog, no documentation, and no Office 365 notification. Isn’t that strange?

The Planner browser UI now displays a notice to users when someone else has changed tasks in a plan. This is useful, but it would be much better if Microsoft enabled support for the Office 365 audit log so that events happening in Planner flowed into the audit log. There’s no sign of that happening, despite requests for three years or more.

The Planner iOS app now supports the ability to share items like tweets, Facebook posts, and web links and create them as new tasks in plans. It’s a very useful feature announced in the Planner blog, but never highlighted to Office 365 tenants in a Message Center notification.

At the Ignite 2019 conference in Orlando, Microsoft announced that Office 365 Groups will soon support sensitivity labels, but only to mark group containers with levels of sensitivity. The actual content of the containers, like the messages in Outlook Groups or Teams, will remain unaffected by the labels. For now.

Planner, the task management app built into Office 365, has been upgraded to support a priority field for tasks. By itself, that’s not very exciting, but the new Group by Priority view is pretty good and makes it easy to move tasks within priorities in a plan. It just goes to prove that how a new feature is implemented is equally important to the existence of the new feature.

From version 1.56 on, you can synchronize your My Tasks list from Planner to To-Do. The integration works well and it’s easy to manage Planner tasks in To-Do. Some of the more advanced actions aren’t available in To-Do, but a quick link to Planner solves the problem. Planner tasks are also accessible in the To-Do mobile app.

Microsoft has announced that Planner now boasts the ability to copy a plan. Apparently, the idea is to save time by setting up plan templates that you can reuse. Office 365’s task management app might not get as much love as other apps, but this is a useful set forward. Only users who are allowed to create new Office 365 groups can copy plans.